I am really happy – here my latest article about the fascination of northern lights in english on http://finland.fi
Hier mein Polarlicht Artikel auf englisch. 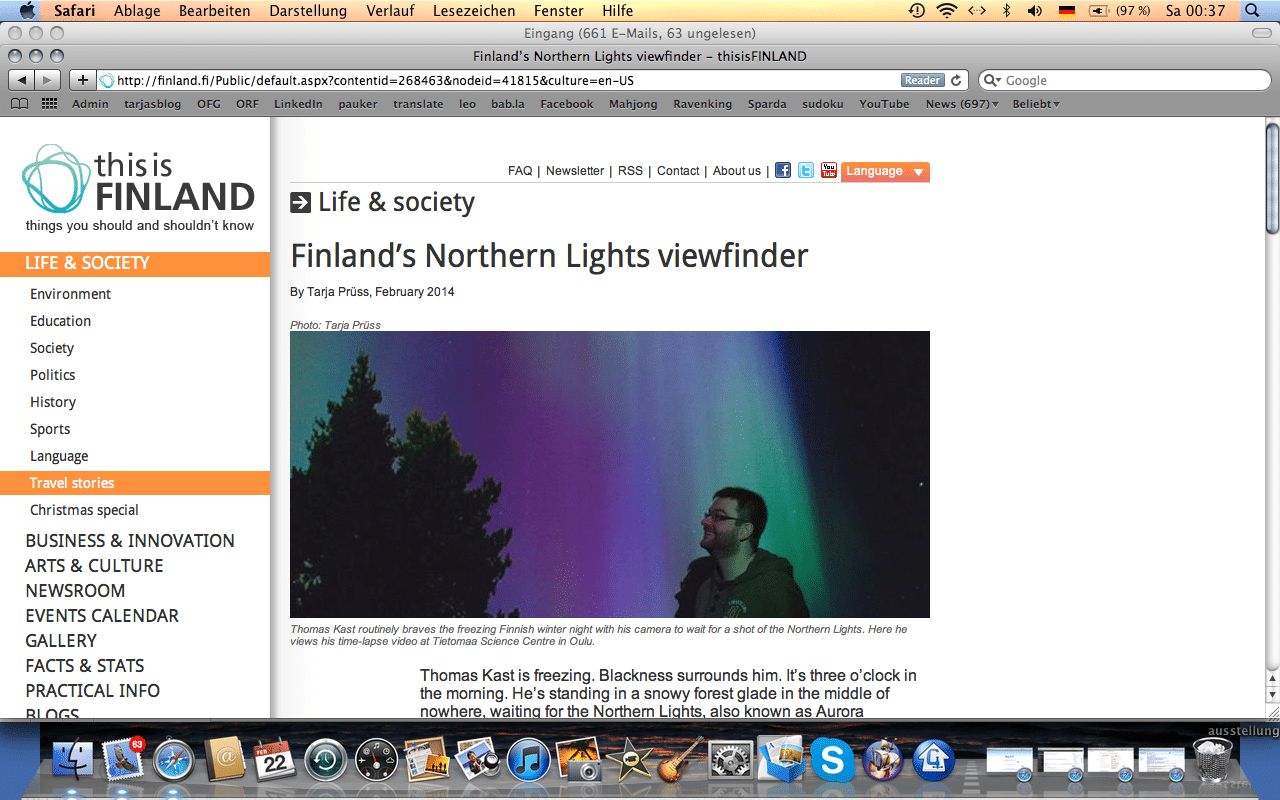 Thomas Kast is freezing. Blackness surrounds him. It’s three o’clock in the morning. He’s standing in a snowy forest glade in the middle of nowhere, waiting for the Northern Lights, also known as Aurora Borealis. You can see the resulting photos in our slideshow below.

Kast is exhausted. The thermometer shows 18 degrees below zero Celsius (zero degrees Fahrenheit). His eyes scour the night sky. His camera is displaying early signs of freezing up. For hours he’s been standing in the cold, hoping to experience a moment of magic: the appearance of the Northern Lights.

Originally from near Karlsruhe, Germany, Kast has lived in Finland since 2000 and works for a major mobile network company based in Oulu, a university town of 190,000 people about 200 kilometres south of the Arctic Circle. He came to Finland for career reasons and wound up staying after he met the love of his life. After his family, the Northern Lights form his other great passion.

A camera, a tripod, spare batteries, a torch and a flask of tea: That’s about all he needs when he sets out into the night – apart from three or four layers of clothing and warm boots, of course.

Kast logs hundreds of kilometres each year seeking out the Aurora Borealis all over northern Finland.Photo: Thomas Kast/Salamapaja

Before he heads out, the Northern Lights obsessive pores endlessly over various websites giving predictions of where to catch the Aurora Borealis. A blur of tables, graphs and figures demands to be deciphered and correlated. Geomagnetic fields, wind speeds, the surface activity of the sun and many other factors influence his decision. And you need patience and, if possible, absolute darkness. Even streetlights can hinder visibility.

“And then the weather has to play along,” he says. “Recently, unbelievably strong auroras were being predicted, but what good is that if the sky here in Oulu is covered with clouds? Then there’s no chance of seeing the lights.”

Sometimes Kast journeys for hundreds of kilometres just to enjoy cloud-free skies somewhere in northern Finland – just to capture the mesmerising Northern Lights. More than 60 freezing nights resulted in hundreds, maybe even thousands of photographs, from which Kast created a time-lapse video entitled Aurora: Queen of the night.

With the green, yellow and orange Northern Lights visible on the horizon, Kast shows the nightly movement of the stars by combining a sequence of 200 photos into one.Photo: Thomas Kast/Salamapaja

The Northern Lights don’t lend themselves to being filmed. A still photo with a long exposure time is required to capture them, so Kast made a time-lapse video instead. “In this respect, the human eye is far superior to technology,” he says.

What began as a hobby now takes up an increasing amount of space in his life. He blogs about it, offers Aurora Borealis trips for tourists and has published a calendar of his photos.

“For several years we’ve wanted to set up a special exhibition about the Northern Lights in our region. That’s important to us. The video has finally made that possible. We set up a special space in the centre’s 45-metre (148-foot) tower.”

Kast says that displays of the Northern Lights can still leave him at a loss for words.Photo: Thomas Kast/Salamapaja

Kast stands before the huge screen in the otherwise pitch-black space and gazes, entranced, at his time-lapse sequences. His eyes shine.

“It’s really amazing to see your own pictures this big,” he says. “I hope that I manage to share some of my fascination with the Northern Lights through this film, that people become inspired to see the phenomenon for themselves.”

He still finds it magical when he sees the Aurora Borealis dancing in the night sky with his own eyes. The cold and exhaustion are forgotten. “Sometimes it’s so magnificent that I’m rendered speechless with awe,” he says.

There’s no way he’ll ever get bored with it. “It’s different every time. It’s mesmerising every time.”

This is why people chase the Northern Lights 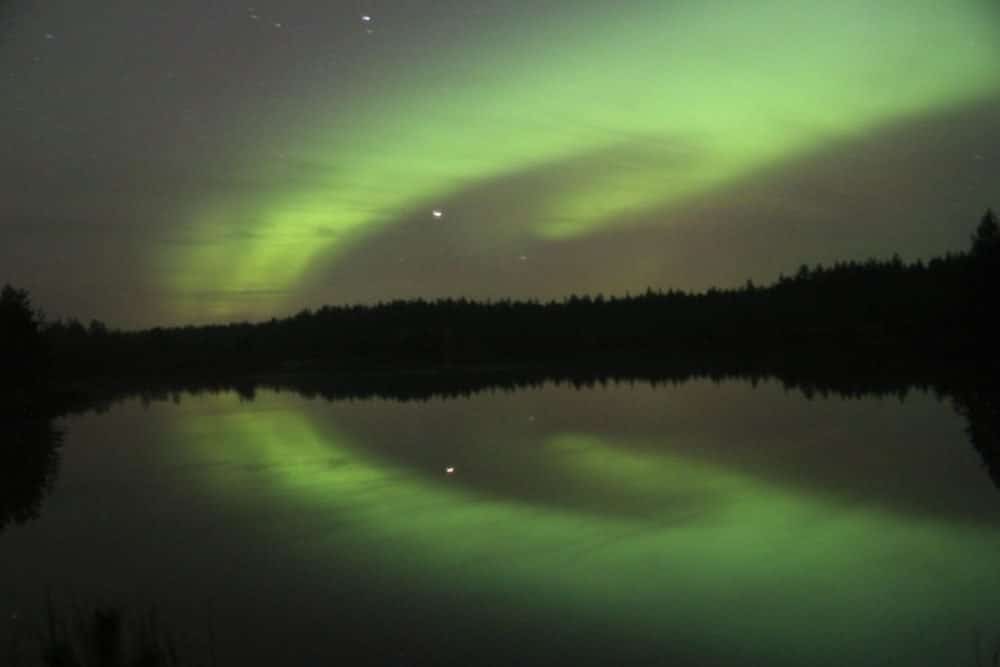 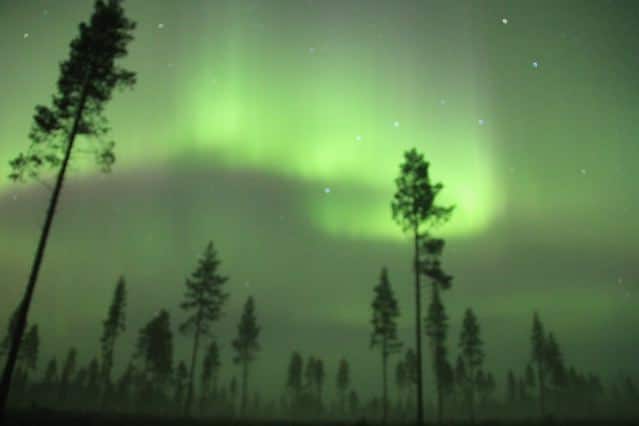 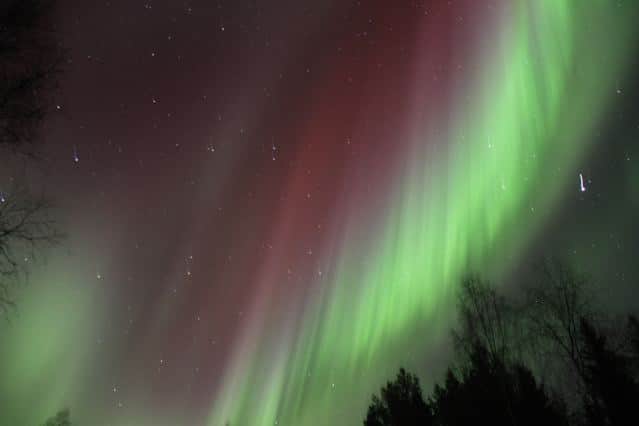 6 Kommentare zu „northern lights: the passion, the lights, the words“

This website uses cookies to improve your experience while you navigate through the website. Out of these, the cookies that are categorized as necessary are stored on your browser as they are essential for the working of basic functionalities of the website. We also use third-party cookies that help us analyze and understand how you use this website. These cookies will be stored in your browser only with your consent. You also have the option to opt-out of these cookies. But opting out of some of these cookies may affect your browsing experience.
Notwendige Cookies immer aktiv
Notwendige Cookies sind für das einwandfreie Funktionieren der Website absolut notwendig. Diese Kategorie umfasst nur Cookies, die grundlegende Funktionalitäten und Sicherheitsmerkmale der Website gewährleisten. Diese Cookies speichern keine persönlichen Informationen.
Nicht notwendige Cookies
Jegliche Cookies, die für das Funktionieren der Website möglicherweise nicht besonders notwendig sind und speziell dazu verwendet werden, persönliche Daten der Benutzer über Analysen, Anzeigen und andere eingebettete Inhalte zu sammeln, werden als nicht notwendige Cookies bezeichnet. Es ist zwingend erforderlich, die Zustimmung des Benutzers einzuholen, bevor diese Cookies auf Ihrer Website eingesetzt werden.
SPEICHERN & AKZEPTIEREN